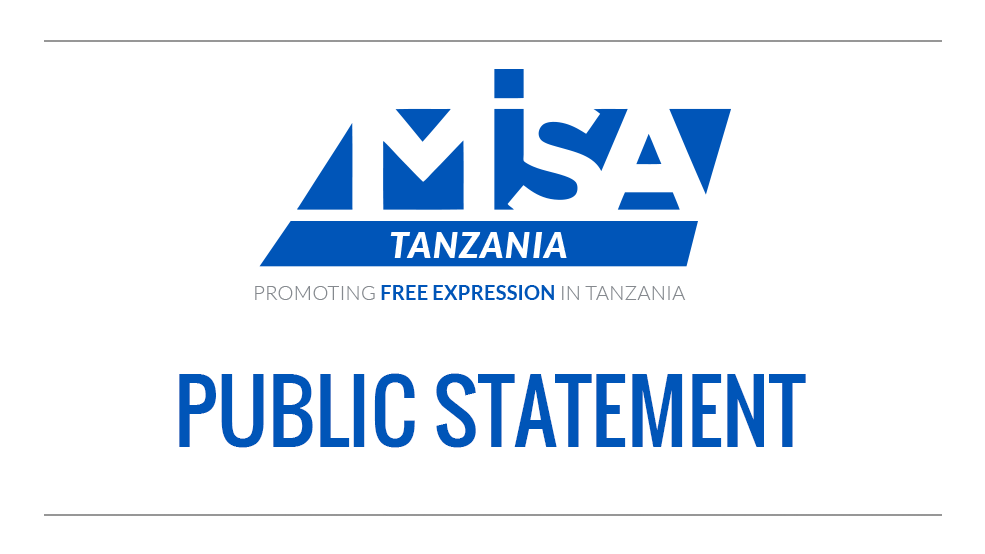 24 Apr, 2020
Public Statement On the Suspension/Ban of Journalist & Online Media in the URT MISA Tanzania is saddened by the suspension of Talib Ussi Hamad, a journalist working with Tanzania Daima newspaper in Zanzibar. A statement issued by the Revolutionary Government of Zanzibar on 20th April 2020 confirmed a six (6) months suspension of Mr. Hamad […]

On the Suspension/Ban of Journalist & Online Media in the URT

MISA Tanzania is saddened by the suspension of Talib Ussi Hamad, a journalist working with Tanzania Daima newspaper in Zanzibar. A statement issued by the Revolutionary Government of Zanzibar on 20th April 2020 confirmed a six (6) months suspension of Mr. Hamad from performing any journalistic activities in the Isles following breach of Section 41 and 42(a) and (b) of Registration of News Agent, Newspapers and Books Act of 1988 as amended in 1997. Relatedly, Mr. Hamad was banned for posting on his Facebook account that fellow journalist was infected by corona virus contrary to government guidelines and lack of professionalism.

Regrettably, we acknowledge that the journalist in question acted irresponsibly by posting information which he was not supposed to. However, a warning from the Authorities would have been more appropriate and constructive than the ban. Moreover, authorities should direct him, and others who commit misconducts of this nature sometimes unknowingly to professional bodies like MISA to be reformed.

The suspension of Mr. Hamad is similar action in the Mainland where Mwananchi Newspaper online were banned for alleged misconduct/ violations of professional ethics. These incidences not only paint bad picture on the country’s records on media freedom but also affect the credibility and efficiency of media in facilitating exchange and dissemination of news and information of public interest. We, MISA Tanzania acknowledge the important role of media and journalists in spearheading people and national development. We equally acknowledge the role of relevant state media authorities in upholding professionalism in the industry. However, this role will be meaningful if media practitioners and journalists execute their journalistic duties professionally and within legal boundaries.

We understand that unfriendly provisions of media and access to information related laws affect media effectiveness and in particular, how journalists conduct themselves professionally while on and off duty. However, it is wise for media regulators and authorities to apply such laws with restraint especially in handling mistakes committed by journalists. We ask the Revolutionary Government of Zanzibar through the responsible Minister to lift the ban imposed on Talib Ussi Hamad and allow him to receive professional guidance from media organizations such as MISA Tanzania.

MISA Tanzania call upon journalists and media practitioners to acquaint themselves with media laws, policies and professional guidelines to accurately and objectively report issues of public interest, and in particular the ongoing COVID 19 pandemic.

On freedom of expression online and offline, with specific reference to the COVID 19 pandemic MISA Tanzania urge relevant authorities to proactively continue availing important information to the media. This will help public in getting reliable information on the pandemic instead of being misinformed by unverified content producers particularly on social media.

No Tweets available. Login as Admin to see more details.
We use cookies on our website to give you the most relevant experience by remembering your preferences and repeat visits. By clicking “Accept All”, you consent to the use of ALL the cookies. However, you may visit "Cookie Settings" to provide a controlled consent.
Cookie SettingsAccept All
Manage consent

This website uses cookies to improve your experience while you navigate through the website. Out of these, the cookies that are categorized as necessary are stored on your browser as they are essential for the working of basic functionalities of the website. We also use third-party cookies that help us analyze and understand how you use this website. These cookies will be stored in your browser only with your consent. You also have the option to opt-out of these cookies. But opting out of some of these cookies may affect your browsing experience.
Necessary Always Enabled
Necessary cookies are absolutely essential for the website to function properly. This category only includes cookies that ensures basic functionalities and security features of the website. These cookies do not store any personal information.
Non-necessary
Any cookies that may not be particularly necessary for the website to function and is used specifically to collect user personal data via analytics, ads, other embedded contents are termed as non-necessary cookies. It is mandatory to procure user consent prior to running these cookies on your website.
SAVE & ACCEPT